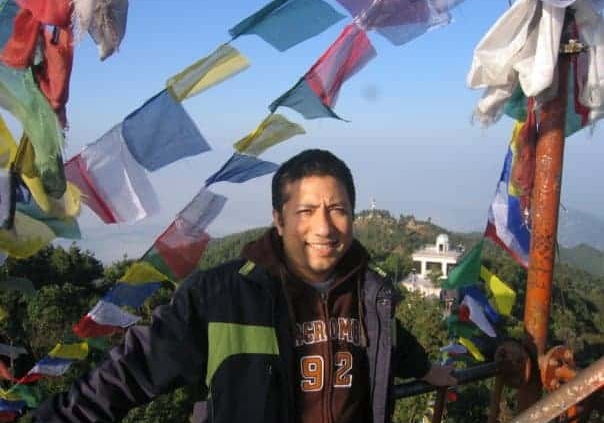 A post as I stop over in Delhi on my way to my Uncle Gerald in Rome:

I was only in Nepal for 6 days but it was lovely. My main host, Nabeen, created a full agenda and I visited almost every important place in the Valley. There is more, but he made sure I hit the majors and had a personal family or friend guiding me the whole time. Today on the way to the airport he said, I forgot to schedule you “alone” time to explor the city yourself ( which is very true!) but then said my visit was simply too short for that!

I saw Swayambunath (spelling wrong) a major Buddhist stupa with Praveen my first day. Praveen has his green card in Canada but is in Kathmandu for his first child’s birth. He had been in Tucson one visit for gem show and stayed with us and knew my mom so it was sweet. In fact, she had done his astrology chart and he said it was all coming to pass. The stupa is on top of a hill and is a great walk/hike that gives you a view of the valley as well as the spiritual value of the stupa and monastery upon it.

The next day I went with Prabina and her friend Prabakar to one of the village schools they are running a program with. It was interesting to see what they are doing- creating programs that bridge the gap between village children, their illiterate parents (in most cases), and teachers. Then we went to “Pattan”- a seperate enclave of the valley that has its own history and series of fascinating shrines.

The next day we went to Nagarkot, a 2 hour drive up from the valley to see the sunset. Something like heading up to Mount Lemmon for you Tucson folks reading, only your backdrop in one direction is the awesome Himalayas. We spent the night and had some good belly laughs. I slept with Nabeens mother who only speaks Newari and we figured out how to communicate in our own way. She has been teaching me some Newari words as well which has been great fun. She howls at the way I pronounce things. It is of course a struggle for the Newari people to keep their language alive. The older folks speak it to each other, the younger ones can speak it to their parents, but speak Nepali to each other, the newest generation only gets what their grandparents give them or pieces from their parents.

The sunrise was not as we would have liked. We got up at 6am to begin watching and continued to 9:30 or so. The sun appeared but it was not clear so the Himalayas were not fully visable- only pieces. Nabeen has this funny sound he makes when he is frustrated and it definitely was being heard. I had a great time trying to catch it, with wonderful company, so I was not disappointed in the least. I think I glimpsed Mount Everest for a moment, 142 kilometers away.

We then headed to “Baktapur” another small enclave like Pattan. It has an entrance fee for tourists but Nabeen was determined to avoid it. He bushwhacked his way to an obscure entrance, told me to lay low, and gunned it past the guards who saw Nepali people rather than tourists. Quite funny, hugh? Baktapur is well organized for tourists so you see wonderful stupas and shrines, some active and some dormant. You see some residents doing their thing but mainly it is geared towards tourists. You feel a bit like you are on a set for “Kathmandu” of yore. They are famous for their curd or yogurt, so we had some. Nabeen and Prabeena found a small shop that sold it, were aghast at the price, talked her down a bit, and we proceeded to enjoy. A sweet soft curd made in earthen ware vessels. It is one of my best food memories so far.

The next day Nireesh took my to Bouddhanath and Pashupati Temple to top off the list of majors. Bouddanath is the biggest stupa in the valley and a world heritage site. It is the central hub of Tibetan Buddhist activity and pilgrimage in Nepal. It is large and again, well organized for the tourist. We spun prayer wheels as we entered, gave acknowledgement to the Buddha’s and deities that mark the entrance, passed our hands over the flame that burns in the front, circumambulated the large structure.

I noticed lots of prayer flags extending from the top point down and wondered if they were placed for people who had died. Nabeen told me earlier that was what they were for when we had seen them atop the tallest tower in Nagarkot.

I asked, via Nireesh who speaks Nepali, how much it was to string my own and the man selling flags told me the price and procedure. It took 10 separate strings of flags, I should write who I was wanting to honor on the flag in marker, and some of the young boys would climb up and attach them. They searched for a marker and I proceeded to assign one string to each person that came to mind.

Foremost in my mind was my mother of course who felt deep love for and found great consolation from the Tibetan tradition, and who dreamt of coming to Kathmandu, but never made it. I spelled out her whole name- Sharon Rose Veronica O’Connor Korshak “Grihananda”. I included other people who died in her lifetime- her whole family (minus Aunt Valerie), my father and his mom Shirley, a few others that came to my mind from my recent past.

They showed me where they would string them and then we watched, payment upon completion. It was one of the highlights of my trip so far, a perfect, natural moment where I realized I had completed something spiritually very significant.

We had chanted the Tibentan Prayer for the Dead for 49 days after she died, her Guru Kriyananda had done the Kriya rituals for her as well, we had a memorial in Tucson, Chicago, and then the release of the ashes into Lake Michigan. But this was the world of her vivid imagination, and I was here at one of its center points, placing the flags with her and others we loved in mind. Now they will wave, disintegrate, and thus scatter their prayers into the atmosphere. Om Mane Padme Hum. May All Beings Be Enlightened. 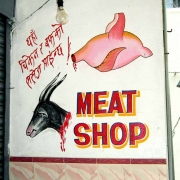 Starring Me!
Scroll to top